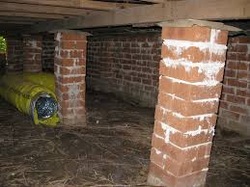 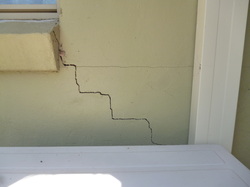 Vertical and horizontal Cracks a result of the brick piers settling into the foundation which has caused movement in the footings. 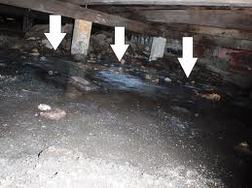 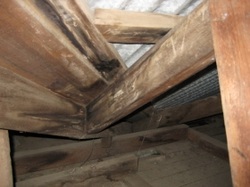 Roofing timbers heavily affected by Timber Defibration – The breakdown of timber fibres over time due to exposure to surrounding elements. Not many options for repair as it usually affects most timbers, replacement is most likely.

Breakdown of bathroom or shower floor membrane - Causing wet-rot decay of subfloor timbers affected below as well as being a haven for timber pests.

Timber supporting Strut is no longer mechanically fixed and is only a mater of time before being ineffective – Rectification is simple.

Most common problems of older type homes is no Antcaps between brick piers and timber bearers to identify Termite activity, and no Rising Damp protection through brick piers to timbers, especially in damp environments like this area – Rectification is simple and usually in one application.

Water flowing through the subfloor area of the building due to poor site drainage.

Previous Termite damage has been repaired but the Termites were not completely eradicated resulting in renewed pest attack to the new timbers.

Some brickwork has been removed to allow ease of access but has a Builder or Engineer been engage to clarify structural stability.

An old Electrical Circuit Board in a unit – Whilst not a defect but awareness must be raised to be updated to incorporate a Residual Current Device (RCD) for safety.